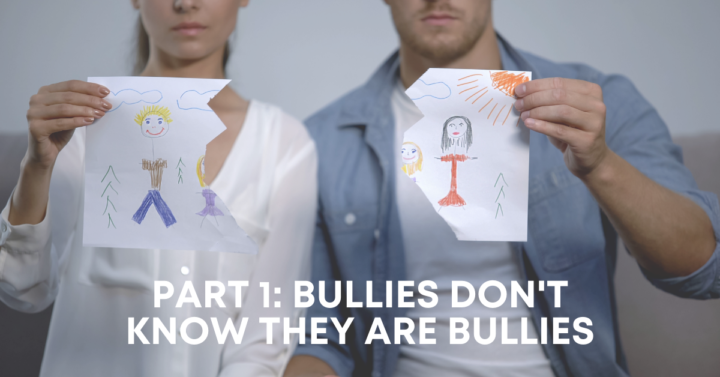 As a therapist and divorce coach, I’ve sat through many hours of discussion around custody. Here’s what I’ve learned: there is no easy answer to this problem. What works for one ex-couple might not work for another. Using what I’ve observed and learned over the years, I’ve written a series of blog posts to outline what to expect as you move through what can be a contentious process. I hope these blogs can provide some insight on what your child needs along with tips on how to make the process less hostile.

Bullies Don’t Know They Are Bullies

There is a reason it’s called a custody battle. Interestingly, this writing occurs at the time when Russia has invaded Ukraine to pilfer their resources, all the while killing innocent people. No one is spared in war. In this case, the bully believes they’re entitled to and even own the rights to what the Ukrainian people have. Vladimir Putin, supported by other Russian leaders, believes he has the right to go in and get resources by force. He’s willing to make decisions about the lives of military members as well as innocent bystanders. Personally, I would say this has more to do with ego and power than anyone’s rights.

This is not much different than what I see as a therapist in custody battles. One parent (or both) believes they have “ownership” of the child, and that their way is the right way. In their opinion, it’s “in the best interest of the child,” for them to have total control. One parent tries to establish control over the other parent in a battle that has little to do with the child and much more to do with punishing the other parent. Of course, this is incredibly nuanced, and I understand there are valid reasons at times for wanting to limit decision making of the other parent. In my experience, however, I would say this is the exception rather than the rule. More often, there is a total devaluing of the other parents’ importance. This is a tragic mistake.

Let’s remember that children don’t divorce or break up with their parents. Parents divorce.  Parents break up. To attempt to alienate a child from their other parent is likely going to cause pain, emotional damage, and could even be considered emotional abuse.

I know. I already hear the battle cries: “But you don’t know what she/they/he did!” You’re right, I don’t. So each reader is going to have to pause here, take a breath, and understand that if your child is in danger (as determined by an authority that is not you, nor your mother, aunt, brother, sister, friend, etc), then this blog is not for you. This blog is for the parents who are both mentally and physically healthy and able to care for the child (again, not determined by the parent, et al, but by professionals). Often when one parent is angry or has decided to leave the relationship, they have to build up artillery against the other parent to justify their aggressive action. They can’t just say, “Hey, I fell out of love with that person.”  Or, “They have annoying habits that have built up over time and don’t work for me.” Or, “They have betrayed me, so I don’t want to be in a relationship with someone who is not committed to me.”

People can consciously uncouple without pulling their children into the war zone with them. So often I hear: my ex is a narcissist, or has borderline personality disorder, or is dating someone else, or whatever. Determined by… who? You? I don’t want to diminish your pain or suffering, and all those things may be valid and true (in which case you would be well-served by talking to a therapist). But even if your ex is a narcissist, does it directly impact the way they treat your children? Or make them a bad parent? A bad partner, yes, a bad parent, maybe. But maybe not.   Try to avoid generalizing behavior towards you to behavior towards your child, or diagnosing people unless you have a license to do so.

So: how do we find a peaceful way through this war zone?

Although it may not seem like it, it is possible to split and agree on joint custody. It is possible to have two mature parents who are able to co-parent and put their child’s best interests first. This doesn’t mean you have to be friends with or even like each other. It means you’re able to set aside your own wishes, desires, and emotions in order to make decisions based on what’s best for your child. You’re able to make the decision to be mature in order to help your child grow up in a physically and emotionally secure environment.

At this point, you may or may not be able to identify yourself in this scenario. We’re going to take a break here in this discussion to give you a moment to observe yourself and make a determination of your role and the decisions you’re making. Come back for part 2 of this blog series to learn how custody battles impact your children, the outcome of your relationship, and some tips on how to help yourself and your child through the battle zones.

Disclaimer: Lori Mazenko is not an attorney, nor making legal or diagnostics recommendations.  Each reader needs to determine their own needs and use these tips at their own discretion. This blog applies to mentally healthy parents, and may not apply to your particular situation. Lori Mazenko will not be held liable for any use or misuse of the information contained herein.

Learn how to start healing from divorce with our 100% free video series and downloadable worksheets.

We help you figure out the first steps toward recovery, how to talk to others about your divorce, how to manage your anxious thoughts, and more.